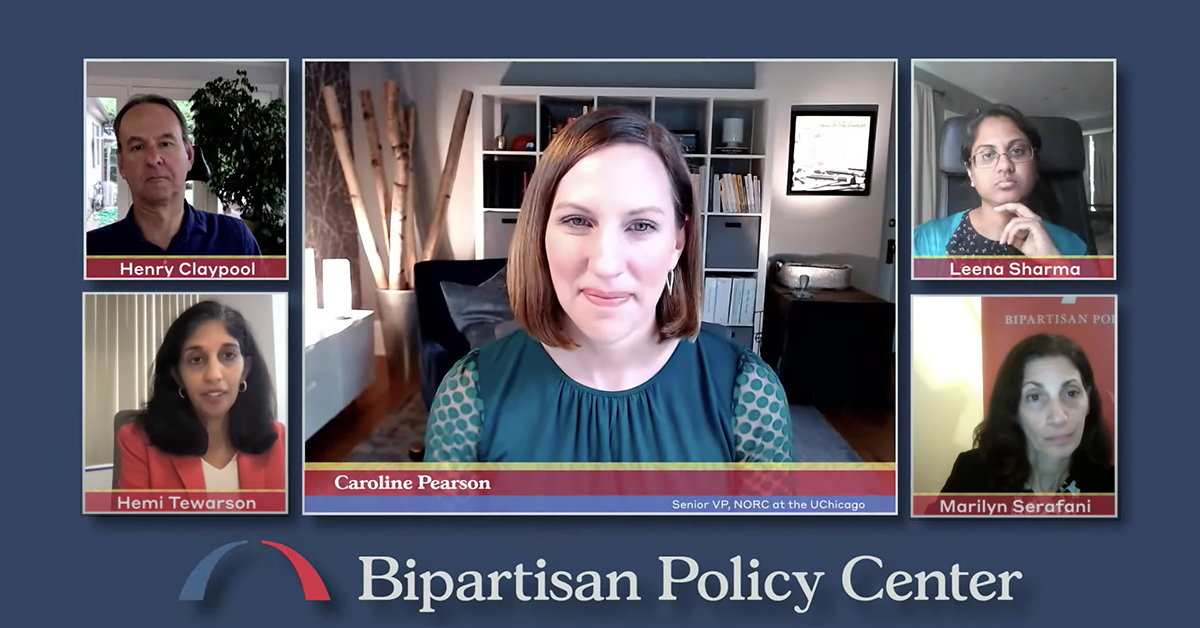 Don’t overlook the “forgotten middle” when creating policy, said Nexus Fellow Caroline Pearson, Senior Vice President at NORC at the University of Chicago. Pearson recently took part in an interesting and in-depth panel discussion on a report from the Bipartisan Policy Center (BPC) that provides policy recommendations for increasing access to long-term services and supports (LTSS).

The forgotten middle are those seniors who are “unlikely to qualify for Medicaid, and unlikely to be able to afford many of the private seniors housing options they may need as their health, mobility and cognitive status decline,” Pearson explained.

She cautioned that while “we have tried before and failed to do major, audacious, long-term care reforms” there is reason to hope for something more significant now. “The magnitude of the problem before us has paralyzed us for a long time. But it doesn’t have to be a purely public sector solution,” she said. “There are private resources available, if we were more creative and organized about how we helped people find those and how we delivered them to people.” She cautioned that reform may turn out to be an incremental process.

Pearson addressed the issue of helping people remain in their homes longer, which many seniors prefer. “When you look at the cost of care as people age, housing is a huge component. If we can safely and effectively keep people in their homes, that really lowers the annual cost of care.” In fact, now is a good time for advances in this area. As she pointed out, “In a year in which I’ve had basically everything delivered to my house, and all services come to me, it’s a good time for this sort of innovation.”

When asked which policy for expanding or improving long-term care would top her priority list, Pearson gave a nod to an idea raised by her fellow Nexus Fellows, Anne Tumlinson and David Grabowski. “Funding and program coverage is important, but the landscape is confusing. For people trying to help themselves or their loved ones, it’s difficult to know where to begin,” Pearson said. “Funding a navigation service, a place to begin, to connect you to the private and public resources available to you, would be a huge step in the right direction.”

Pearson was joined on the panel by Leena Sharma, Project Manager and Senior Policy Analyst at Community Catalyst, Henry Claypool, Policy Director of the Community Living Policy Center at UCSF, and Hemi Tewarson, Executive Director of The National Academy for State Health Policy. The panel was hosted by Marilyn Serafani, Director of the Health Project at BPC.

Listen to the full discussion.

https://www.nexusinsights.net/wp-content/uploads/2021/11/image1.jpg 628 1200 Nexus Insights https://www.nexusinsights.net/wp-content/uploads/2022/04/nexus-logo-reverse-296x92-1.png Nexus Insights2021-11-04 13:29:462021-11-21 05:39:26The Forgotten Middle: Improving the Availability of Long-Term Care
Scroll to top
Nexus Insights uses cookies on our website to give you the most relevant experience by remembering you and understanding how you use our website. By clicking “Accept”, you consent to the use of all cookies.
PRIVACY POLICY | COOKIE SETTINGSACCEPT
Manage consent